Come watch 'Civic' as she is returned back into the wild!

Home / Awareness / Come watch ‘Civic’ as she is returned back into the wild! 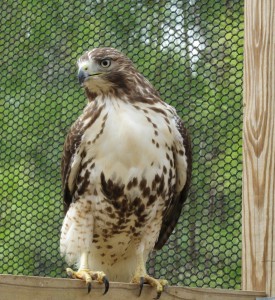 Come watch ‘Civic’ as she is returned back into the wild!!! A few months back, PAWS Wildlife Rehab took in a beautiful juvenile Red Tailed Hawk that was emaciated, had severe feather damage, and foot problems that prevented her from hunting properly. She is healthy, beautiful and ready for release!!

Meet PAWS and HSOG near the Civic Center in Greenwood (where she was found) to watch her release TOMORROW (Thursday, February 21) at 12:15pm (over lunch) near the ball field/ Farmer’s Market between the Civic Center and the Greenwood Animal Shelter. (Look for us to see exactly where we are.)

We will be releasing her precisely at 12:15pm. If you come 60 seconds late, you will miss it. (She is NOT going to linger around once we let go! LOL!)

PAWS would like to publicly thank Cory Wells and all the people who called and tried to catch her for several days until Cory was finally able to catch her, as well as the Humane Society of Greenwood, SC for allowing wildlife to be dropped off and held there for us until we can arrange transport, as was the care with Civic

Civic is grateful to all the people who came together to get her proper care and will thank you all by giving you a beautiful parting viewing of her tail feathers as she flies back into her wild world.

Please share this on your walls to invite everyone to come witness her release!!!

About the Author : Brian Clark